Blog
You are here: Home / Blog / Frontpage Article / Made My Weekend 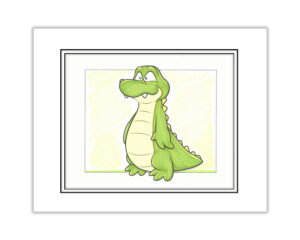 First, I’d like to announce at both shows, we SOLD OUT of our first comic, Eisner Nominated Stanley’s Ghost.  That’s absolutely fantastic!!  And we didn’t sell it to just adults with kids, but a lot of teens and up were buying the book for themselves.  From our first convention back since over a year and a half, the Milwaukee Comic Con, a fan came up to me and said, “I loved the book overall, but really loved the bat”.  I’m not going to give anything away if you haven’t read it yet.  But that was a great feeling!  Another piece we SOLD OUT of was the Original Hand Colored Louie and Louie Variant pieces!  That little gator is getting lots of love, and I couldn’t be happier.  Since starting my own studio and creating my own characters, when people like stuff I’ve created, it’s SUCH a great feeling.  I can’t put it into words, it’s just a feeling.  Which leads me to what made my weekend.

At the Madison Mighty Con Comic Con, it started off slow.  But in the middle of show, we got hit pretty hard for about 3 hours.  One person in particular I was helping out really just stood out and made my weekend.  A few years ago I started introducing my characters to conventions.  It was nerve wrecking.  You don’t know how people are going to react to your characters.  But a couple of years ago, I was set up at that show and introduced one of my new characters (at that time), Agatha, the Candy Witch.  Agatha doesn’t eat children, but she changes them into “Candy Kids or Kids of Candy”.  So this past Sunday, I was helping one particular young lady and she was telling me about a piece I had years ago that had a few characters on it, but all were witches.  I showed her the piece, Natasha’s Witches, but she said no, that’s not it.  She’s trying to explain the piece to me and it sounded a little familiar but at the same time, didn’t.  But then she said the background looked like it was water colored.  Right there, I knew what she was looking for.  I brought her over to where I had the piece she was looking for and showed her.  “THAT’S IT, THAT’S IT!  I’ve been looking for this piece since that first time I saw it years ago”!  Ok, so let me tell you, that was an amazing feeling!  Someone was looking for this piece, remembered it and sought me out at a convention for it.  That, really made my weekend.  So if you haven’t guessed it, she bought the piece and took a couple of my business cards…lol! 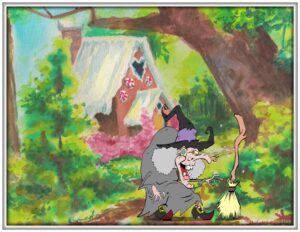 That was such a great feeling, I don’t know how else to put that.  But this goes to show you, you never know how your characters are going to impact others.

So to everyone who I saw this weekend and came out to BOTH shows, thank you.  Again it was great to get back out there and see you all again, and we’re looking forward to the next time we see you.  That being said, I’m updating our show appearances for the rest of the year today, so don’t forget to check out the “event’s” page here for an updated list of where we’ll be.

Do What You Have Too
Meeting MKE @ the Makers Market
New FOCUS!
Hiring a 2D Animator
HIRING Cartoonist/Illustrator for Comic
The Job of the Job